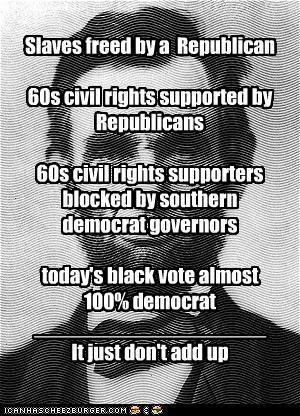 They’re both nobodies – well, actually, they’re both Secretaries of the Interior.

The difference is when Usher travelled to Gettysburg, he went with his President.

When Jewell goes this November, she’ll be the headliner – her President is taking a pass.

Obama will be a no-show at the 150th anniversary of Lincoln’s Gettysburg Address.

For a president who has so demonstrably associated himself with Lincoln – the heir of Lincoln’s policies who announced his candidacy from the steps of the Old State Capitol in Springfield and used the Lincoln Bible (twice) at his inauguration – this is nothing less than a profile in cowardice.

In the end, Barack Obama simply didn’t have the stones.

History will note that Lincoln’s legacy did not live up to the challenge.

By ABC News
Oct 31, 2013 6:06pm
By BRIAN ROSS and RHONDA SCHWARTZ
Several more current and former National Security Agency insiders, inspired by American fugitive Edward Snowden, have come forward as whistleblowers with details of the shadowy agency’s operations, according to an attorney at a whistleblower protection organization.
“I think the government hopes to chill speech by employees in the national security and intelligence fields, especially those at the NSA and CIA, but the unintended consequence is [that] more and more whistleblowers are coming through the doors of the Government Accountability Project (GAP),” said Jesselyn Radack, referring to the organization where she works as the National Security and Human Rights Director. “I think courage is contagious, and we see more and more people from the NSA coming through our door after Snowden made these revelations.”
Radack, an attorney who has met with and been in communication with Snowden, said “a handful” of people in the intelligence community have come forward since this summer when several major international newspapers began writing about the NSA’s classified foreign and domestic surveillance programs – stories based on thousands of secret NSA documents allegedly stolen by Snowden, a former NSA contractor.

Snowden has been charged in the U.S. with espionage-related crimes, and America’s top intelligence officials said he is a traitor who has put America’s national security in jeopardy.
But the legal threats and high-level condemnation haven’t kept others from coming forward with new information, Radack said.
“There definitely could be more revelations in addition to those that Snowden has revealed and that are continuing to come out,” she told ABC News.
Snowden is currently living in Russia, after being granted temporary asylum there. Today his Russian lawyer said he had gotten a job at a major Russian website. Radack said she was unaware of any new employment for Snowden.

The NSA declined to offer immediate comment in response to an after-hours request by ABC News.
ABC News’ Lee Ferran contributed to this report.

Issa (R-Calif.) accused Sebelius’s agency of withholding documents that would shed light on why HealthCare.gov launched with massive technical problems on Oct. 1.

The subpoena compels HHS to produce certain documents by Nov. 13. In a statement, Issa called the department’s failure to comply with previous information requests “completely unacceptable.”

“The American people deserve to know why the administration spent significant taxpayer money on a product that is entirely dysfunctional and puts their personal information at risk,” said the California Republican.

Issa had raised the possibility of a subpoena in a letter to HHS last week. He issued a similar order to ObamaCare contractor Quality Software Services Inc. on Tuesday.The Obama administration is under enormous pressure to explain why the healthcare law’s online enrollment system is still failing.

Republicans on the Oversight Committee are seeking information about the site’s construction and testing, as well as the number of people who have successfully enrolled so far.

Department spokeswoman Joanne Peters said the committee has now made five separate requests for documents and interviews with HHS officials.

“While we are working diligently to satisfy their interest and have repeatedly communicated our intent to cooperate, their timeline was not feasible given the vast scope of their requests,” Peters said.

Napolitano: Is Obama a dupe, or a totalitarian, megalomonical liar?

Now we know how pervasive this NSA spying is: It not only reaches the Supreme Court, the Pentagon, the CIA, the local police and the cellphones and homes of all Americans, it reaches the Oval Office itself. Yet when the president denies that he knows of this, that denial leads to more questions.

The president claims he can start secret foreign wars using the CIA, secretly kill Americans using drones, and now secretly spy on anyone anywhere using the NSA.
Is the president an unwitting dupe to a secret rats’ nest of uncontrolled government spies and killers? Or is he a megalomaniacal, totalitarian secret micromanager who lies regularly, consistently and systematically about the role of government in our lives?
Read more: http://www.washingtontimes.com/news/2013/oct/30/napolitano-going-the-stasi-one-better-and-in-ameri/?page=2#ixzz2jJAPdPAT
Follow us: @washtimes on Twitter