Lashing out at the former Prime Minister, Johnson wrote for The Telegraph on Sunday that “I have come to the conclusion that Tony Blair has finally gone mad.”

His essay “struck me as unhinged in its refusal to face facts. In discussing the disaster of modern Iraq he made assertions that are so jaw-droppingly and breathtakingly at variance with reality that he surely needs professional psychiatric help.”

Attacking also the former PM’s vague claim that Islam should act more responsibly in watching out for both Shia and Sunni extremism on its fringes (since extremism, allegedly, arises out of thin air), Johnson writes: “He said that the allied invasion of 2003 was in no way responsible for the present nightmare – in which Al-Qaeda has taken control of a huge chunk of the country and is beheading and torturing Shias, women, Christians and anyone else who falls foul of its ghastly medieval agenda. Tony Blair now believes that all this was ‘always, repeat always’ going to happen.”

“The reality is that before the US-led invasion of Iraq in 2003, there was no Al-Qaeda presence in that country, none at all.” Despite his brutal tyranny, “Saddam did not have anything to do with the 9/11 attack and he did not possess Weapons of Mass Destruction.”

Hammering the point home about just what exactly British and American interventionism accomplished in Iraq, Johnson lays it out simply, “The truth is that we destroyed the institutions of authority in Iraq without having the foggiest idea what would come next. As one senior British general has put it to me, ‘we snipped the spinal cord’ without any plan to replace it. There are more than 100,000 dead Iraqis who would be alive today if we had not gone in and created the conditions for such a conflict, to say nothing of the troops from America, Britain and other countries who have lost their lives in the shambles.” 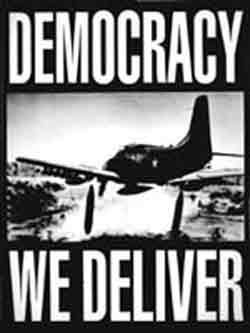 “The second reason is that mass surveillance creates a dramatic power imbalance between citizens and government. In a democracy the citizens are supposed to have all the power and the government is supposed to be the means by which the citizens exercise that power. But when you have a surveillance state, the state has all the power and citizens have very little. In a democratic society you should have a state with maximum transparency and maximum civil liberties for citizens. But in a surveillance state the exact opposite is true.”

The Mass Surveillance National Security State blossomed with the 9/11 attack, which was a staged event. DW Though I walk in the midst of trouble, you preserve my life; you stretch out your hand against the wrath of my enemies, and your right hand delivers me.

Today’s Israel Inspiration
This past Thursday night, three Israeli yeshiva students were kidnapped by Hamas terrorists. There are no words to explain the pain and fear of the family and all of Israel; rather we ask that you say a prayer or perform an act of loving kindness today in the merit of their safe return. Over the centuries, not even the most difficult moments have been able to crush the resilient Jewish spirit, when we recite Psalms and remember that “You preserve my life.” Please pray urgently for Eyal Yifrah, 19, Gilad Shaar, 16, and Naftali Frenkel, 16.