The FBI sent 100 agents in 40 armored vehicles to murder one man in Oregon, but they haven't even interviewed Hillary Clinton yet.

Why did you take

The time will come

State Department: 22 Emails Will Not Be Released As “Top Secret” https://t.co/YOBNnnsqnS

Should pray 4 him, not mock

The Genie is out of the bottle.
Rupert Murdoch owns Fox News.Wikipedia: “Australian-born media mogul Rupert Murdoch is the chairman and CEO of 21st Century Fox, the owner of Fox News Channel.”  He is also on the Board of an oil company (Genie Energy) with Dick Cheney and Jacob Rothschild. Israel gave this oil company the rights to oil wells in the Golan Heights, which is legally Syria’s land.

Russia has called the U.S.’s bluff as to ISIS, which, after all, is CIA-created. (Note that ISIS has never attacked Israel. Isn’t that strange for an Islamic group?) Russia was on the verge of wiping out the U.S.’s excuse to be in Syria. Russia was invited to Syria by a legitimately-elected government. The U.S. is in Syria illegally. The U.S. has created the refugee crisis.
The Unholy Trinity of Murdoch, Cheney and Rothschild influence U.S., Israeli and French intelligence agencies to stage false flags, which then provide an excuse to re-invade Syria, so the U.S. and France (with Israel’s Mossad behind the scenes) can have the upper hand again.
The goal is to keep Assad distracted while they steal oil from his wells in the Golan Heights. The ultimate goal is to overthrow Assad so the money nuts can have a puppet ruler in place and milk Syria dry.
If the French have no guns, the Unholy Trinity can stage false flags in France any time they want. Fox News can drum up the drama and provide the “solution,” which will be to take over Syria, then Iran.

A properly managed justice system would put the Robber Barons and their minions in prison.

To the Crisis Actress

Black ops pay well
To reach their goals:
Were you paid well
To sell your soul?
~Day

Grand juries in the United States

From Wikipedia, the free encyclopedia 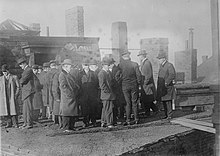 A grand jury investigating the fire that destroyed the Arcadia Hotel in Boston, Massachusetts in November 1913.

The United States is virtually the only common law jurisdiction in the world that continues to use the grand jury to screen criminal indictments.[1][2] Generally speaking, a grand jury may issue an indictment for a crime, also known as a “true bill,” only if it finds, based upon the evidence that has been presented to it, that there is probable cause to believe that a crime has been committed by a criminal suspect. Unlike a petit jury, which resolves a particular civil or criminal case, a grand jury (typically having twenty-three or more members) serves as a group for a sustained period of time in all or many of the cases that come up in the jurisdiction, generally under the supervision of a federal U.S. attorney, a county district attorney, or a state attorney-general and hears evidence ex parte (i.e. without suspect or person of interest involvement in the proceedings).

While all states in the U.S. currently have provisions for grand juries,[3] only half of the states actually employ them[4] and twenty-two require their use, to varying extents.[5] The modern trend is to use an adversarial preliminary hearing before a trial court judge, rather than grand jury, in the screening role of determining whether there is evidence establishing probable cause that a defendant committed a serious felony before that defendant is required to go to trial and risk a conviction on those charges.

California, Florida,[6] and some other states,[7][8][9] also use so called civil grand juries, investigating grand juries, or the equivalent, to oversee and investigate the conduct of government institutions, in addition to dealing with criminal indictments. For example, in Tennessee, according to the office of the Davidson County District Attorney: